« La Démesure du Possible » is a wide “All-Over”, a digital interactive mural painting that has been conceived by Art dans la Cité and designed by French digital artist Fred Perié.
It aims at improving the welcoming, the stay and the environment of the dependent elderly (with Alzheimer): it will contribute to reduce the effects of the loss of physical and cognitive autonomy, of withdrawal, monotony by stimulating both the body and the mind. It shall create a unique space for interpersonal relations and convivial communication in the care facility as well. 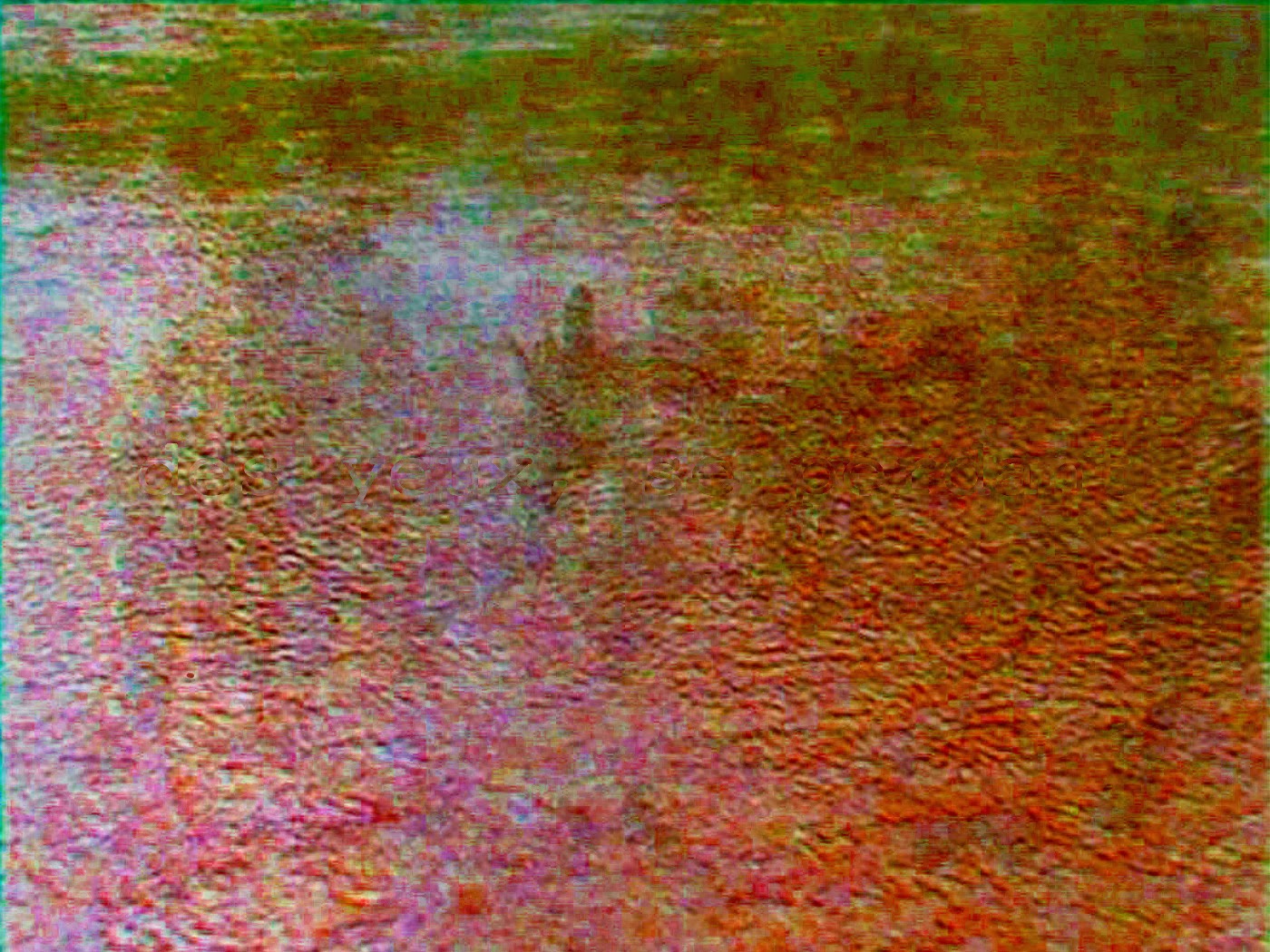 In order to provide an innovative and artistic answer to the crucial issue of the increasing number of elderly in our modern societies* and the necessity at the same time to improve the quality of the activities programs but also of the global facility environment that contributes to the well-being of both patients and teams, Art dans la Cité did lead a multidimensional study on the needs of the elderly, along with patients association, medical teams, neuroscientists and experts of Alzheimer disease for the past 2 years.
*Near a million persons live with the Alzheimer disease; 225000 new cases are diagnosed every year; more than 3 million persons are concerned by it; a quarter of the Elder population will be concerned by the disease in 2020.
Art dans la Cité also did take advantage of its wide experience in Geriatrics hospitals all over Europe since 2000, gathering studies and informations on the way an artwork created by an artist with elder people for a specific place can make the medical team daily work easier and be complementary to the medical treatment, by reinforcing the self-confidence and the autonomy of the elderly as well as their will to be active of their own life and not only a passive body receiving treatments.

The 5 main goals of « La Démesure du Possible » are :
> To maintain the Elder people autonomy and sociability 1) by encouraging them to be
connected through the artwork creative process to the outside world, to the others (other
residents, medical teams, relatives and friends), but also to their own emotions, 2) by
encouraging them to take an active part to the creation and therefore to their daily life.
> To stimulate the Elder people cognitive and physical reflexes (memories, body-mind
connexions, sense of creativity, sensorial faculties…) and propose them an original activity
that creates a dialogue with all their faculties and capacities, as a global person.
>To open the health facility on the outside world, to create a bridge with the City and the
other citizen and change the global environment and atmosphere within the building.
>To change the people’s consideration on the Elderly and the consideration of the Elder
persons on themselves, to value their body, and their complete being.
> To use the new technologies for social and human purposes, to comfort Elder people
well-being; to include the Digital tools in the Elder people environment in order to solve
the “digital gap”; to propose a revolutionary digital concept

La Démesure du Possible » is a wide digital painting that is instantly created by the Elder
people movements. This artwork is “proprioceptive” as it invites each person around to
interact and “play” with it.
The relatives and the medical teams are associated to the process during the residence of the
artist. The artwork is screened in a main wall but it can be duplicated and screened in other
spaces. 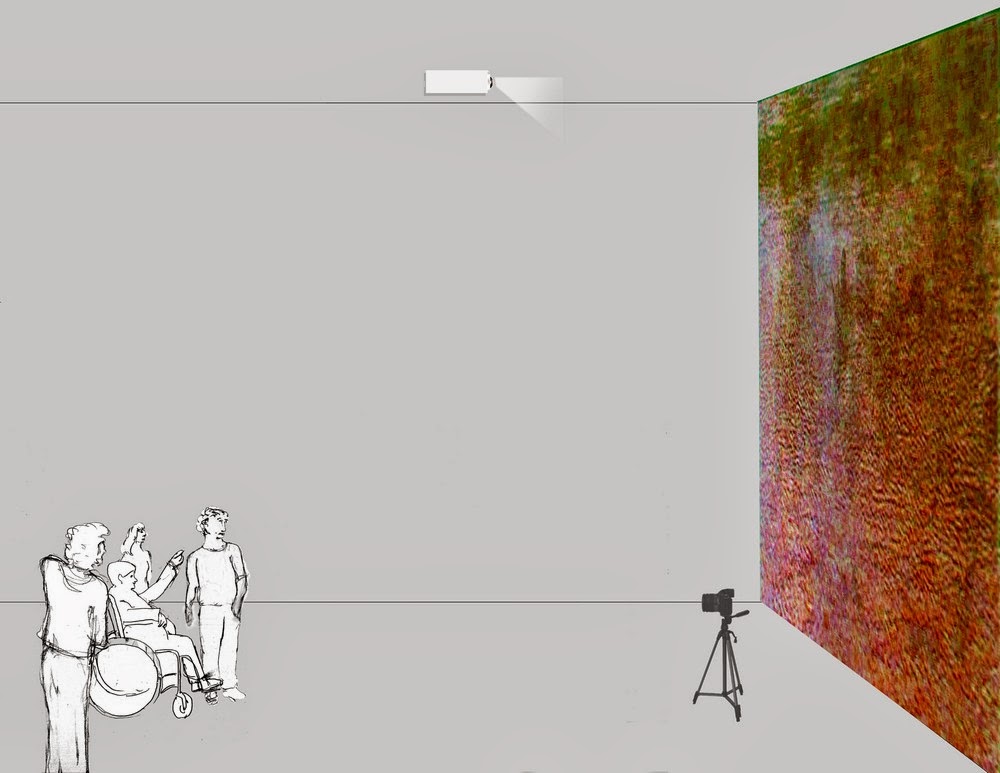 An easy process that everyone can understand and interact with: the work is a large picture, generated in real time from the movement of patients, even the smallest ones. To do this, a camera captures movements and gestures in a suitable space, and a computing device transforms them into a pictorial object projected on a large scale.
The program can select fragments of the movements and screen them. These movements have a double impact on the screened picture:
- An immediate action that the patient can observe : he therefore understands how the process works
- An accumulation of captured movements on a long-term that remain for a while on the screened picture and that give an idea of the flow of time
 A process that stimulates the will to act and interact: every participant discovers that the picture is related to their own movement and that interaction stimulates the will to interact even more with the device and play with it in a poetic or ludic mode. The ever-moving picture is composed of the movements of all the participants. The artist also integrates in the global image, pictorial elements from the immediate outside natural environment such as grass, clouds, sea, sky…
 An essential aspect is the fact that the artwork proceeds to increase the movements so that even the smallest gesture will generate a real movement in the screened picture. As the patient can see his own body with limitations, he notices though that he can contribute to co-create a nice and harmonious picture with the others and that everything is “Possible”.
 The patient is invited to let a print on the picture whatever it is a print that completes the prints of the others, a print that fills the whole space of the picture. That print will remain in time, for a while! It deals with memory and the importance of each print to build a common picture, within a common goal. It raises the consciousness of everybody being important in the creation of the artwork and in the living together. The artwork looks like a mirror that reflects both the present time, the past time and the future. The present time transforms what has been and prepares what will come next. In a more philosophical point of view, this interactive artwork shows that the immediate participation of each participant will build in a near future the memory of all those who participated